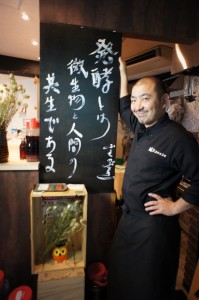 ———“What does fermented food mean to you, Mr. Fushiki?”

———“When people hear the word fermentation, they think of fermented seasonings such as miso and soy sauce, or fermented ingredients such as natto (fermented soybeans) and umeboshi (pickled plum). When you say fermented food, however, can I think of it as something like food marinated in miso or soy sauce?”

This process of decomposing will not happen if you use general miso or soy sauce that you buy at supermarkets, because they typically contain no enzymes or microorganisms. Microorganisms are decomposers, and they decompose things using enzymes that are made of proteins so they can live. We use this to our benefit.
If you marinate food with miso that has active fermentation going on, proteins and fats in the food will be decomposed.  Now, if you eat food that didn’t go through this such as regular grilled salmon, you will have to do the decomposing of all these things yourself in your body. With fermented food, it is all done ahead of time, so it’s energy efficient and very good for you.

Also, it’s hard for the decomposed ingredients to accumulate in your body because they are now smaller molecules. If you can’t properly break down proteins and fats in your body, it can lead to modern-day illnesses such as allergies and atopic eczema. With fermented food, proteins and fats are broken down in advance, so it’s very good for you. Children with wheat allergy can eat Hishio or wheat miso and have no allergic reaction.

Fermented food is different from rotten food and it poses no harm to human body, but if the fermentation is overdone, you wouldn’t want to taste it. My restaurant has 51-year-old miso. Of course it’s edible, but it smells like a horse stable. It’s like maturation of wine.

The amino acids from decomposed protein contain umami; if the protein is plant-based you get glutamic acid, with animal-based protein you get inosinic acid, and from fungi you get guanylic acid. These are the three major umami ingredients, and the microorganism that can generate them exists basically only in Japan. It’s a mold called koji. (aspergillus) 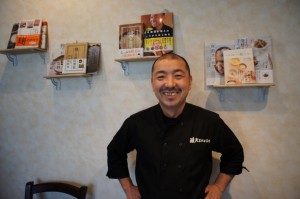 ———“I understand before you focused on fermented food you used to cook mainly Italian and Japanese. What made you decide to work with fermented food?“

It was actually a son of a miso storehouse who gave me his amazake and hishio. As soon as I tasted them, I intuitively knew it would taste great if I marinated salmon in them. When I tried that idea, it tasted much better than I had expected. This caught me by surprise because, as a chef with over two decades of experience, I thought my guesses were pretty good when it comes to taste, but this time my guess was off. Then I started researching and found out about various roles microorganisms and enzymes play.

Before that, when I heard the word enzyme all I could think of was laundry detergents. As I studied more about this, I came to the conclusion that miso and soy sauce are living things. I was quite embarrassed as a professional chef, by how I always thought they were nothing more than ordinary condiments you could get from stores.

Then I realized there must be a lot of chefs who don’t know about this in Japan. Currently my students have been mainly housewives, but my biggest aspiration is to teach other professional chefs about this. I wanted to get them to revisit the important basics. That’s what I had in mind when I first started.