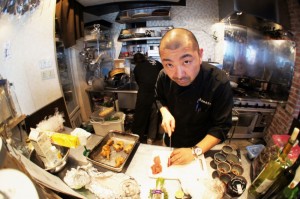 ———“If you had to categorize fermented food, what would you base it on? What would be the key player here?” 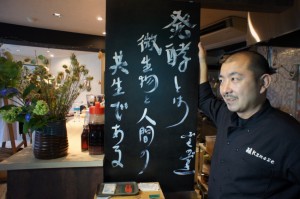 ———“If you had to categorize them now based on what you marinate your food in, what would that be like?”

Even the mixture of peanut butter and hishio can be used as a pickling bed. That means there can be tens of millions of variations. The two things I use the most as a pickling bed at my restaurant are hishio and amazake. Of course, I use soy sauce, sake, and mirin as seasonings, but as pickling beds, probably hishio is the best. It has a quite high ability to break down ingredients. Also the proportion of glutamine acid to inosinic acid is very high, which is a major difference from miso. You can be sure that your final products always have more glutamic acids than inocinic acids. Food tastes better that way, and you can preserve it longer.

Decomposition by koji involves many factors such as salt, heat, microorganisms, adding water, and pressure. Japanese koji’s ability to break down reaches far beyond what heat can do. Rice porridge, for example, is made of rice and water just like amazake, but no matter how long you cook it, it doesn’t gain sweetness on its own. With koji mold in it, however, it will turn into amazake and become sweet.

As starches get broken down into smaller molecules, they eventually become glucose, which is their smallest form. The food won’t have the sweetness until this stage, and you can’t reach that with heat alone. When you let koji do its work with ingredients before you cook them, whether with hishio, miso, soy sauce, or amazake, it will give you flavors unattainable in any other way.  Take fish ara for example; without koji you can cook it in the soup for 100 hours and still not have the great flavor. That’s one of the great things about fermentation.