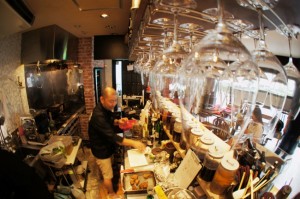 ———“That must have been a quite challenging change in your career. “

You’re right. And I had to study on my own. I still learn new information every month. Now I have much better estimates of various aspects of cooking than before.  My cooking is much more precise now that I can control umami elements with the appropriate temperature, oxygen, acidity, and alcohol percentage.  Although, since fermentation is about living things, it doesn’t always go smoothly as planned.

There were so many questions I had had for a long time as a cook.  I would ask my master chef and he would say, “I don’t know. It’s always been this way.” For example, I’ve had this master chef who always let his ponzu sauce sit in the room temperature for a year before using it. Chefs in Tohoku area usually store their miso in the room temperature. They say that it’s been always known that the refrigerator makes miso taste bad. When mackerel is not fresh enough to be eaten raw, they use it for vinegared mackerel. The same thing with kelp-wrapped sea bream. All these why’s were answered as I studied about fermentation and microorganisms. It was like a light bulb shooting sparks over my head all the time. Every question I had had for twenty years was answered. 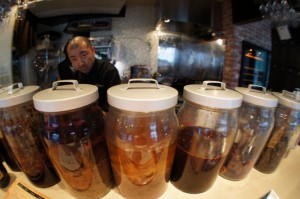 ——— “When people didn’t have refrigerators they dried their food or marinated it in salt, alcohol, or oil to prevent decay. Maybe that is related to fermentation, too?”

It is related because decay is a kind of fermentation. Dried food has the highest preserving capacity. If you marinate in acidic liquid (e.g. vinegar) it gives food better preservation because putrid bacteria don’t like acidity, so they don’t go into food.

E coli. O157 is different. It’s a bacterium that can go into acidic environments.  For bacteria, being in oil is like being in outer space, they can live there but can do nothing, which leads to better preservation.  Microorganisms cannot live when the salt level is higher than that in their natural habitats, so marinating in salt also leads to better preservation. There is a certain order for microorganisms to function in liquid. First, nitrate-reducing bacteria are activated, followed by koji, then plant-based lactic acid bacteria, and finally yeast; now it’s become alcohol. Plant-based lactic acid bacteria are highly acidic, so when there is sugar it keeps creating acid, reducing the liquid’s pH and making it acidic. This makes it impossible for putrid bacteria to enter. Thus, you can have better preservation. Alcohol is the same. In alcohol, microorganisms cannot move at all. So when the alcohol content is 10% to 15% and above, microorganisms die. This shows there is an intricate power balance between bacteria.

So before, I just knew formulas and their outcomes but didn’t know why the formulas work. Now that I’ve studied about fermentation, I know why they work, too. I feel like I’m substantiating Japanese cuisine. 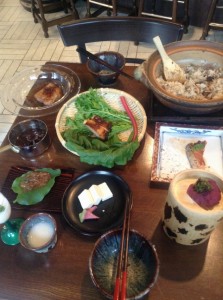 For dashi, whether you use hard or soft water makes a huge difference.

If you’re in the Kansai area the water is soft, and with that you can make dashi really fast. In Kanto or Tohoku, however, the water is hard, and you will need more than double the time just to make kelp dashi. In Milan it even takes a lot longer.  We say we “take” dashi, but what it actually is is extracting umami from dried food through heat breakdown. There is no other way to get umami than taking time. Within Japan, we have two different philosophies regarding glutamine acid (umami) between the Kansai area and the Kanto and Tohoku areas. People don’t want their dashi dark in Kansai, but in Kanto and Tohoku, they like dark dashi.

It is a chemical reaction between amino acids and sugar. Amino acids themselves are dark brown, and when this color becomes prominent on the surface, it’s called  the Maillard reaction. A good example is when banana skins turn dark and eventually black. With bananas, however, it’s only the skin that becomes black. The inside never becomes black but does become brown because of the oxidation of polyphenol. The Maillard reaction can be seen in coffee, too. When you get your toast burned, it’s showing the final stage of the Maillard reaction accelerated by heat. When you grill regular salted salmon and miso-covered salmon, the miso covered one gets burned much more easily. It’s because amino acids are on the surface taking the heat. That’s why in the summer, miso and soy sauce change color suddenly.

When food has a lot of amino acids, the Maillard reaction comes out more strongly. That means you can actually visually recognize the umami in the food as long as it’s properly fermented. The darker miso and soy sauce are, the stronger the umami in them is. The same goes with mirin (sweet cooking rice wine). Mirin is made from shochu, (Japanese distilled spirit) mochi rice, and kome koji (rice malt). Mochi rice has protein, which gets broken down and becomes amino acids, causing the Maillard reaction.

Chopped natto is always light-toned, right? That’s because they chop dried soybeans before they immerse them in water to let go of their proteins. Thus, no Maillard reaction, and white natto. But if you compare regular natto with chopped natto, chopped natto has much less nutrients.