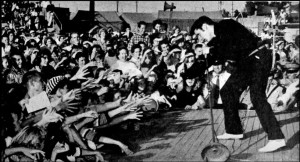 In the era of jazz music, before rock emerged, singers, as well as instrument players, were required to be able to read music scores. Pioneers of Japanese pop music such as Ichiro Fujiyama and Noriko Awaya graduated from music school. Even Enoken, who was also a popular comedian, could read scores.

For young generations, the emergence of Elvis not only freed music from music scores but also defied other conventions. People had never heard anyone sing like him before.

Pat Boone was Elvis’s rival at that time. Taking over the singing styles of Bing Crosby and Frank Sinatra, Boone was more like a “model student,” while Elvis’s music was considered for “bad boys” as he would shake his body and bounce around the stage, performing.

People were shocked when they first heard Hound Dog (1956). They thought shouting at the audience was uncivil, let alone starting a song by doing so, and it was definitely one of the don’ts they had regarding singing.

We can’t say all of his unique singing techniques were his inventions, but the style of singing in songs like All Shook Up (1957) was entirely his original.

In Japan, All Shook Up is considered a song for those who “understand” Elvis. In this song, you can find the miraculous combination of sexiness, humor, and drive along with his signature shouts in perfect balance.

The song title was translated to “Shaken by Love” in Japanese, which was fairly moderate compared to its quite explicit original English title. People ridiculed and criticized Elvis, calling him Pelvis. While the song and his singing style were quite shocking to many, a sense of humor is also there throughout. Once you recognize that, it’s actually a very humorous song. That’s why All Shook Up is an amazingly innovative song.

Elvis invented this technique of singing about being sexy boldly yet humorously and at the same time appearing perfectly cool. All Shook Up has everything Elvis was; mature and childish, masculine and feminine, strong and soft, excited and calm. All these seemingly contradicting qualities coexisted in him and made him attractive.